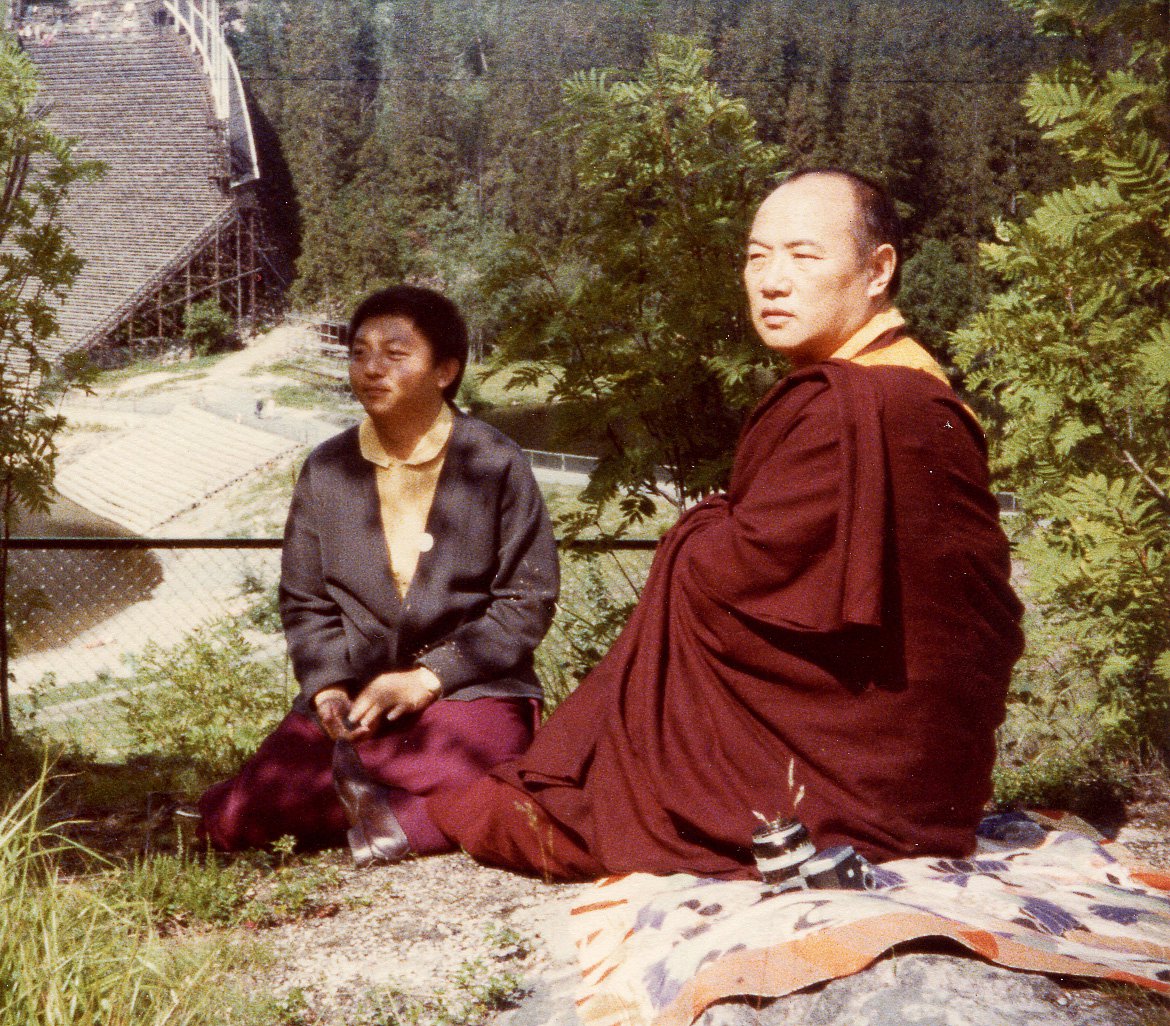 Lama Jigme Rinpoche was born in Kham, Eastern Tibet, in 1949. As a child, together with his brother, the late 14th Kunzig Shamar Rinpoche, Mipham Chökyi Lodrö (1952–2014), he moved to Tsurpu, the monastery of the Karmapas in Tibet. After the Chinese invasion in 1959, he escaped with the 16th Karmapa, Rangjung Rigpe Dorje (1924–1981), and his entourage to the kingdom of Bhutan and then continued to the then-independent kingdom of Sikkim. Near Gangtok, Rumtek, the King Tashi Namgyal offered a piece of land to Karmapa for him to have a place to settle in exile. In Rumtek, H.H. Karmapa founded a monastery—his main seat in exile—in order to ensure the continuity of the Karma Kagyu lineage.

There, together with all the teachers and young students who accompanied H.H. Karmapa or requested his protection, Lama Jigme Rinpoche continued his spiritual education. 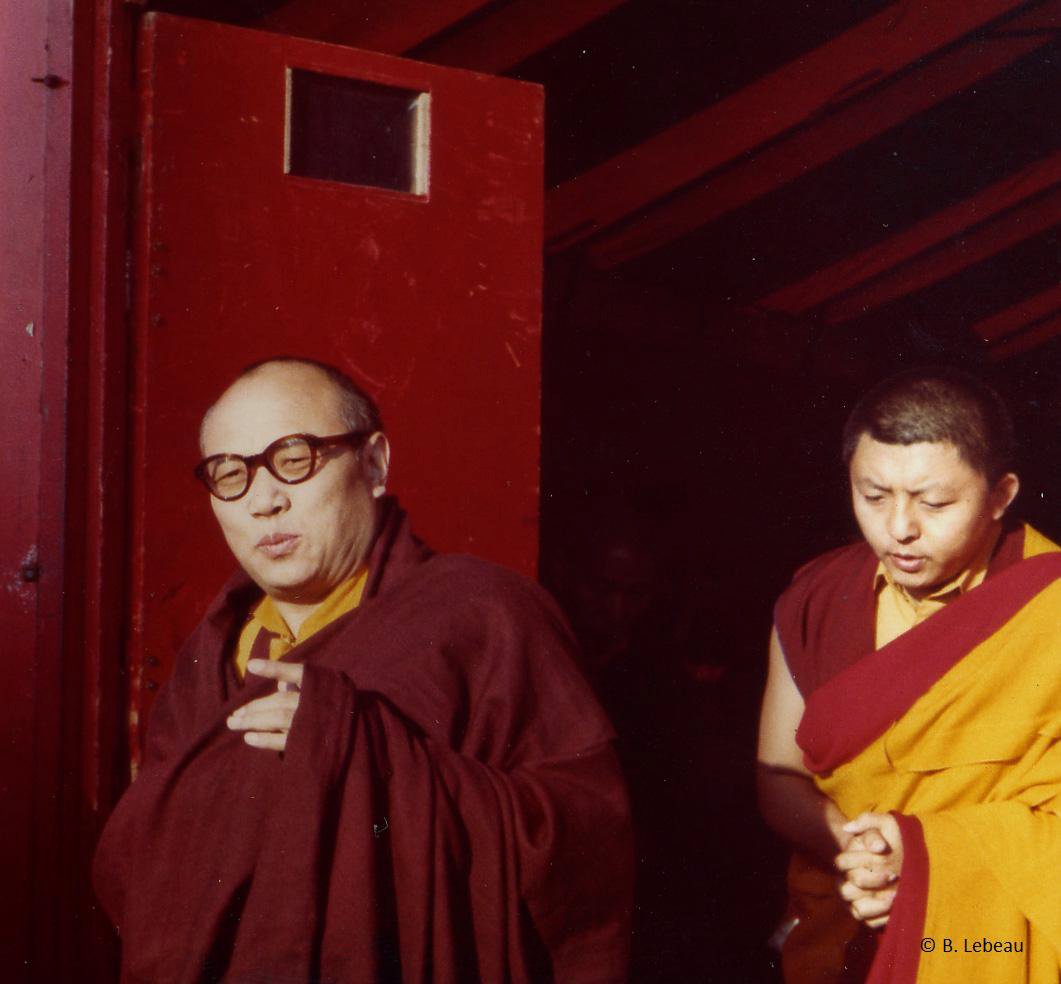 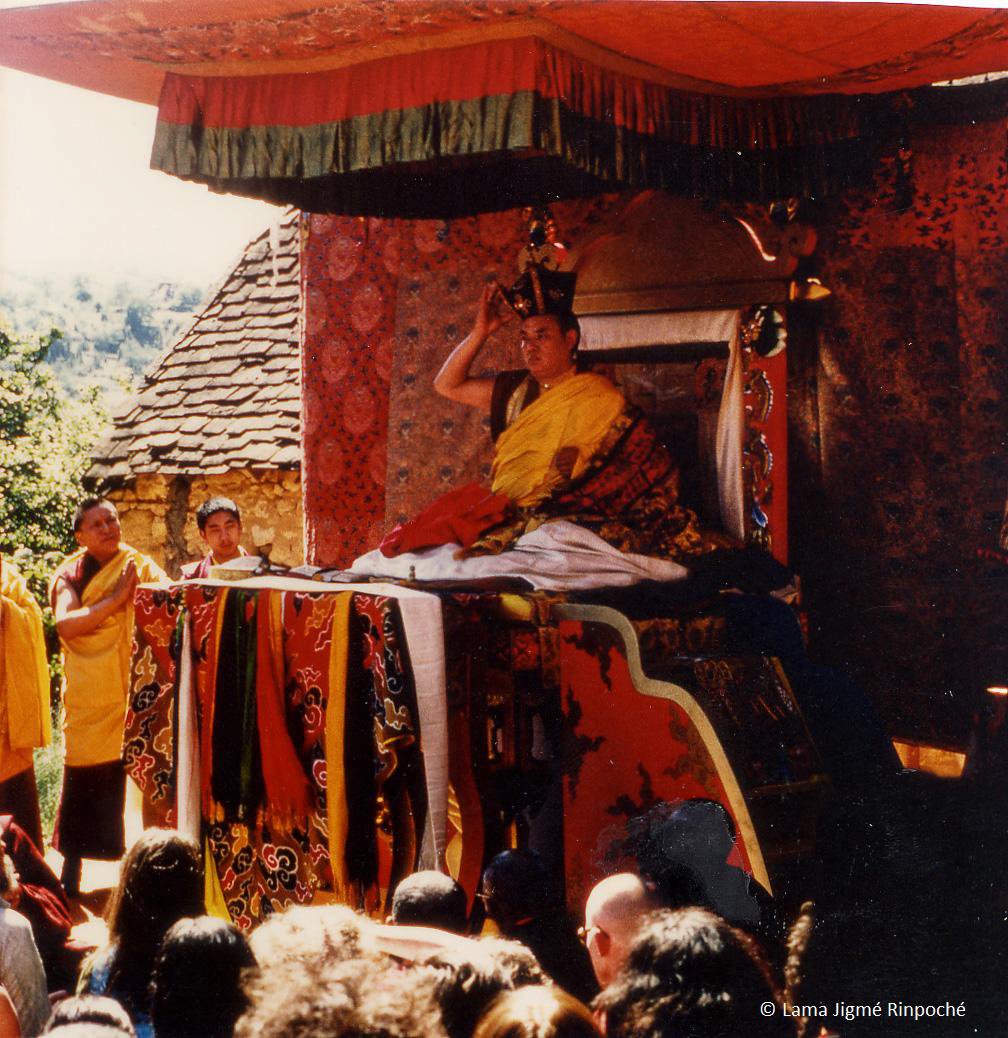 In response to the invitation of some of his students and to the demand of an ever-increasing number of people interested in Buddhism, the 16thKarmapa came to Europe for the first time in 1974.

In 1975, the 16th Karmapa received a piece of land in Dordogne, southwest France. Through a week of intensive Korlo Demchok practice, he took possession of the ground and there sealed the blessing of the Karma Kagyü lineage in Europe, just as he did for Rumtek monastery in the ’60s and in the same way the 1st Karmapa, Düsum Khyenpa (110–1193) blessed the ground when he established the Tsurpu monastery. He named the place Dhagpo Kagyu Ling, “the place of the transmission of the teachings,” and designated it his principal seat, the heart of the European network of the lineage. Later, in 1980, Shamar Rinpoche also did an intensive practice of Gyalwa Gyamtso over a few days.

Upon his return to Europe, the 16th Karmapa explained that five conditions were necessary for Dharma to flourish and be established on a sustainable basis: 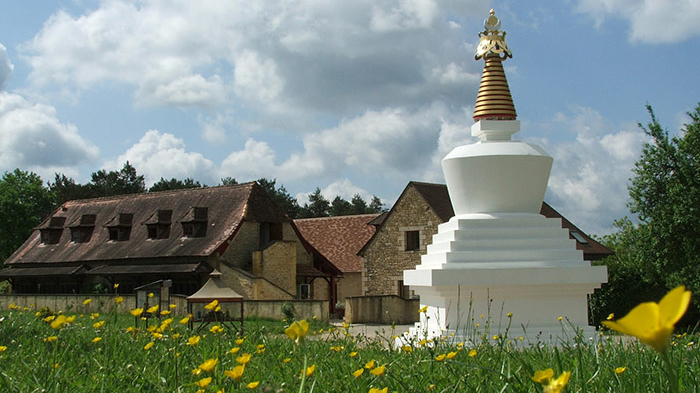 1. A network of centers for Buddhist studies and meditation open to all.

Two public centers in Dordogne and Auvergne and close to seventy local satellite centers in France and Europe where individuals can discover Buddhism and exchange, study, and meditate regularly close to home. 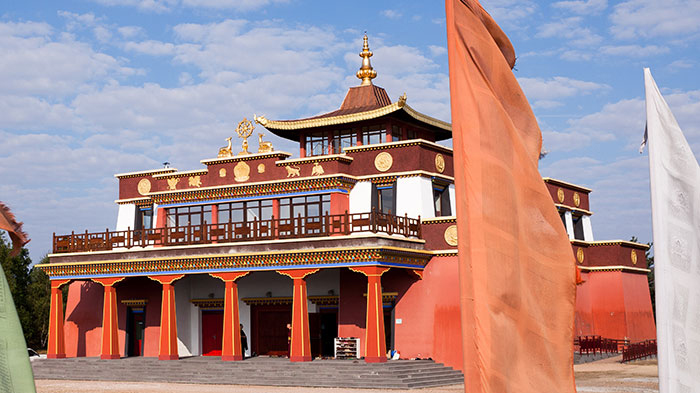 2. A monastery to ensure the continuity of a living tradition.

A place in Auvergne to consecrate one’s life to study and meditation in a monastic context and a great temple where monks, nuns, and laypeople come together to receive teachings and practice together. 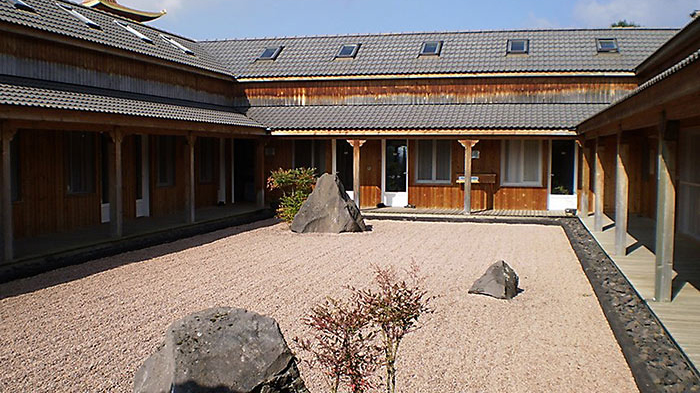 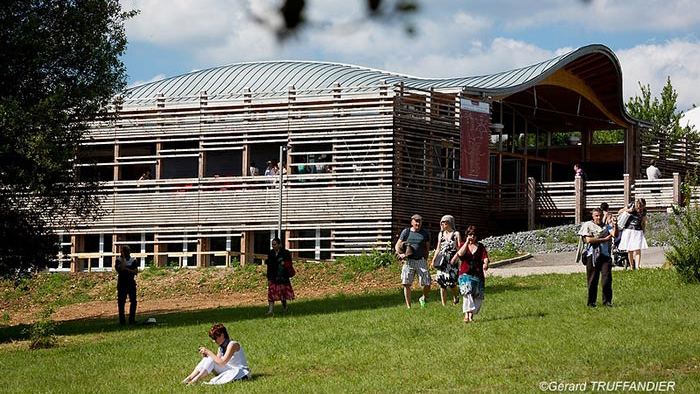 4. An institute to explore contemporary Buddhism.

A space in the Dordogne dedicated to the profound study of Buddhism, open to interdisciplinary dialogue, and peopled with individuals involved in research at the crossroads of knowledge. 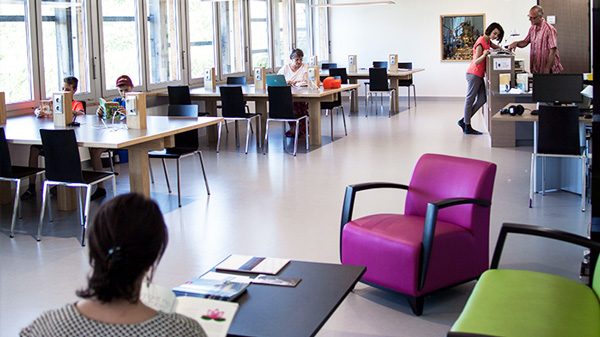 5. A library to preserve the teachings and render them accessible.

Exceptional Western and Tibetan library holdings in the Dordogne, which are available to all—from the passing visitor to the university researcher, and a quiet and comfortable reading room.

The 16th Karmapa appointed Lama Jigme Rinpoche to be his official representative in Europe and sent Gendün Rinpoche and Pawo Rinpoche to join him and help in bringing these five conditions to fruition. Before leaving Europe, the 16th Karmapa said:

“In the person of Lama Jigme Rinpoche, I leave you my heart”. 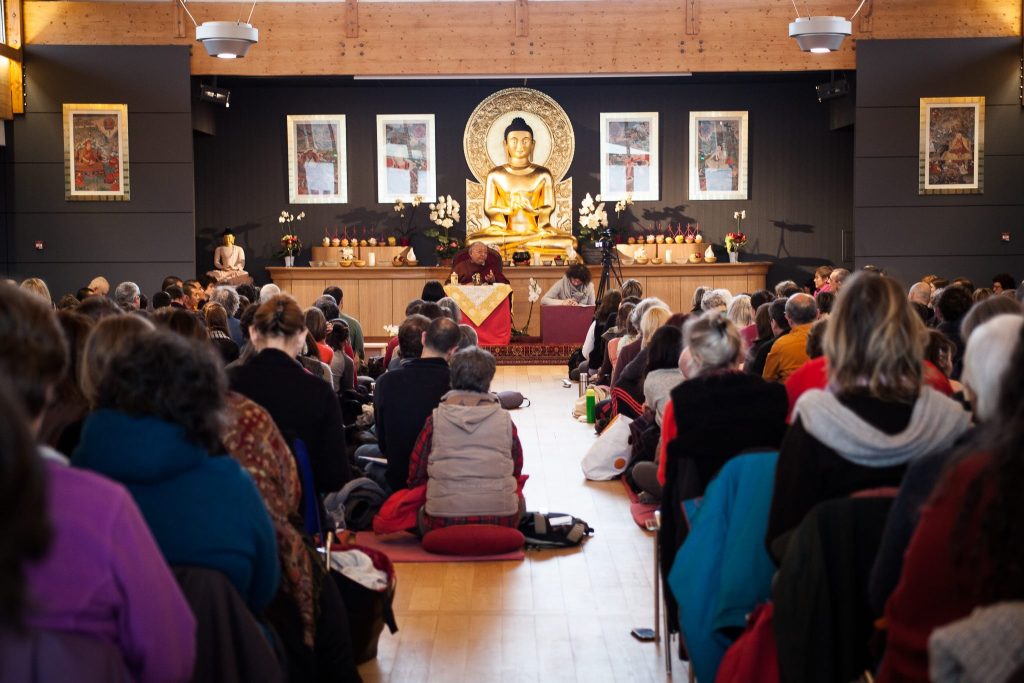 Jigme Rinpoche is the founder of the first non-Catholic religious congregation in France, Karmé Dharma Chakra, which was approved by the French government and which greatly contributed to the settling of Dharma in Europe for all schools of Buddhism.

Jigme Rinpoche undertook the development of Dhagpo Kagyu Ling, as well as a journey to traverse and understand the European continent. The knowledge of Westerners that he has acquired over the last fifty years facilitates a fluid adaptation of the Buddha’s teachings to Western society.

Jigme Rinpoche’s natural ease of communication with people from all walks of life–educators, youth, caregivers, etc.–allows him to inspire all those whom he meets. His wish for religious and spiritual harmony led him to publish a series of interviews with Robert Le Gall, archbishop of Toulouse, to great success in France. This encounter between Catholic and Buddhist traditions opened a door for a better understanding of Buddhist values in the West. Based on his resolutely modern approach to teaching, Jigme Rinpoche has acted as a consultant to managers, executives, and business schools (ESSEC, HEC Paris). In addition, he is the founder or president of numerous humanitarian foundations and associations (Infinite Compassion, École dans le ciel/School in the Sky, Tibet Save & care, Ethic). He teaches all over the world within the Buddhist organizations linked to Karmapa Thaye Dorje: Bodhi Path, Diamond Way and Dhagpo mandala. 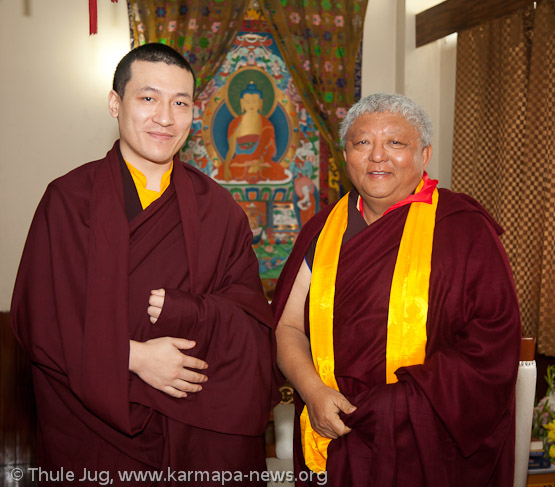 In December 2012, Thaye Dorje, His Holiness the 17th Gyalwa Karmapa, appointed him as his General Secretary in charge of administrative duties for the Karma Kagyu lineage worldwide. Jigme Rinpoche thus travels far and wide, overseeing the running and development of the Karma Kagyu centers and monasteries directly under Karmapa’s authorities.

Since the passing of the 14th Shamar Rinpoche in 2014, Jigme Rinpoche has taken care of the educational system Shamar Rinpoche created in order to preserve and continue the Shamarpa’s work for the welfare of sentient beings. The school system includes a primary school in Takdah, near Darjeeling, India, a college in Kalimpong, West Bengal, India, and an institution for advanced studies, Sharminub, in Kathmandu, Nepal.

Thanks to his unflagging efforts, today the five necessary resources for Buddhism to take root have been developed and made available on the European soil. Following this first milestone in creating autonomy for Buddhism in the West, Jigme Rinpoche also trains and instructs the Western Dharma teachers  (both lay and monastic alike), primarily in France and Germany, while taking care of Buddhist education and monastic continuity in the Himalayan areas. This promotes mutually beneficial exchanges between Asian and Western Buddhist communities for the continuation of the lineage and authentic Dharma teaching.

In addition, Jigme Rinpoche is the author of several books translated in numerous languages.